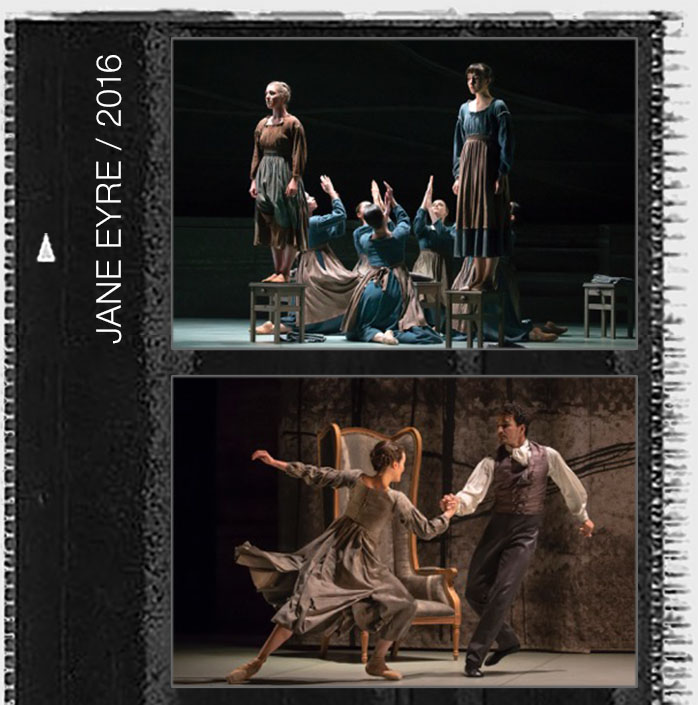 Premiere: 19th May 2016, Northern Ballet, Doncaster and UK tour. Revival of an enlarged version in 2018 including Sadlers Wells, London.

Nominated for a South Bank Award and National Dance Award.

“…Beautifully crafted and moving... Shot through with emotional truth… Marston and the cast made the fate of Charlotte Bronte’s heroine matter every step of the way…The stylized veracity they (the dancers) share is a cornerstone of Marston’s art, rendering her take on Bronte’s feminist gothic romance absorbing and relevant.”
The Times ★★★★

“…a textbook example of dance storytelling that honours its source without becoming slave to it.”
The Financial Times ★★★★

“Cathy Marston’s contemporary reworking of the classic novel lends a new perspective to the old narrative...Marston has succeeded in crafting a beautiful and expressive new ballet that soars in the triumph of effecting change from the inside out.”
The Telegraph ★★★★

“A quietly enthralling classic...”
The Observer ★★★★

“It’s a tribute to Cathy Marston, in her new work for Northern Ballet, that she’s choreographed a Jane who is similarly emancipated from the conventional tropes of the ballet heroine...Marston does nothing by rote, each detail feels specially minted...”
The Guardian ★★★★

“It wasn’t really a surprise that Cathy Marston had a triumph with the Brontë —Royal Ballet-raised but Europe-bred, the choreographer has gradually developed a knack for character empathy and, crucially, a gift for externalising inner feelings in a vividly legible way…It is all very good, serious, sensitive, modern and accessible...”
The Spectator

“What Marston has done so masterfully, is to translate the words effectively into a dance vocabulary and, crucially, into a viable dramatic portrayal…Action is so clear and succinct that time flies and one is completely absorbed…The pas de deux are innovative and compelling; the way they lock heads together and weave through movements suggest the choreographer was in charge. Jane Eyre is a triumph for all concerned and will hopefully remain in Northern Ballet’s repertoire for many seasons to come.”
Dance Europe